Small Wars Journal Book Review: The Dragons and the Snakes: How the Rest Learned to Fight the West

Kilcullen, David. The Dragons and the Snakes: How the Rest Learned to Fight the West. Illustrated edition. Oxford University Press, 2020. 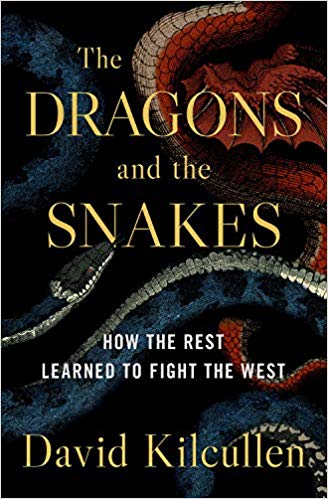 David Kilcullen’s fifth book, The Dragons and the Snakes, provides an evolutionary perspective on how opponents have adapted to counter the dominant military power of the US and its allies. His background in counter insurgencies, intelligence, and strategy shine through in this work. The book’s namesake is resultant of a speech given by CIA director James Woosley who, at the end of the cold war, describes large nations such as Russia as “dragons”, and rogue regimes and insurgencies as snakes. The book’s takeaway is that the “Western high-tech, high-precision, high-cost…” model of warfare used by the West “…is no longer working.” This approach is failing because, through intentional and unintentional adaptation, the dragons have learned to fight like the snakes, and the snakes have learned to fight like the dragons. While some may feel that the book ends rather pessimistically, this reader found Kilcullen’s examination to be pragmatic, nuanced, and showing of a talent for framing complex problems.

Chapter one introduces the Woolseyan security era framed by a speech given by the incoming CIA director James Woosley which introduces the reader to the dragon and snakes. The chapter walks the reader through how this environment has changed because of US and allied actions. In chapter two, attention turns to the Woolseyan “snakes” defined as small state and non-state actors. Here, Kilcullen uses biological based models such as social learning (akin to natural selection), artificial selection, and institutional adaptation to show how non-state actors have adapted to withstand the military superiority of the West. Chapter three continues its focus on adaptation of the “snakes.” This chapter ties adaptation to a “fitness landscape,” a term to encapsulate many factors to including political and social factors and that shape an operating environment. Chapter four and five shifts to Russia and China—the dragons. On Russia, Kilcullen defines a style of actions he calls “liminal warfare,” in which Russia’s actions to destabilize the US and allies intentionally operate in a “grey area” above the threshold of detection, but below the threshold of attribution. In chapter five, Kilcullen shows the adaptation of China and introduces his concept of conceptual envelopment to summarize their strategic actions against the US and democratic based rules in the international system. The work concludes by providing three possible courses of action for the US to take. The first is called “doubling down” and is summarized as a directive to stay the course but increase focus on technological superiority and current methods. The earlier chapters seem to dismiss the possibility of this approach achieving success. The second suggested course is called “landing softly.” This strategy can be characterized as focusing on hegemonic transition but assumes a “suitable successor exists.” The final is called “going Byzantine.” The work favors this approach, and it involves emulating the Byzantine empire by adopting policies that ensure a slow decline. It has similarities to the hegemonic transition of the “landing softly” approach but focuses on suggestions that allow for increased influenced for a longer duration to shape the international environment until a suitable successor can arise. Its noteworthy that these last two suggestions seem to assume that the US led democratic based system is ultimately on a course that ends in defeat, and this course can only be delayed, not stopped.

While Kilcullen seems hesitant to add to the already large vocabulary of international affairs discourse, his introduction of the constructs “fitness landscape, liminal warfare, and “conceptual envelopment” convey a complex set of problems accurately and succinctly. As a military professional struggling to not only understand the increased complexity of the world over the last 20 years, but to also relay this information to those who have been focused on combat operations, these constructs have proven indispensable in discussion with peers.

Ultimately, Kilcullen’s work shows that US lead efforts are not only fighting incorrectly, but also working under an incorrect set of suppositions about warfare. Like the thinkers explored in Jack Snyder’s analysis of the “Cult of the Offensive,” before WWI, today the US assumptions on the nature of technology and war are incorrect and augur disaster. Kilcullen’s key principle inspires this reader to envision an analogy of the West and its allies sitting at a table playing chess against their adversaries. While the West continues to focus on where to move its pieces according to the rules, Russia has hired termites to chew the legs off the West’s chair, non-state actors are setting the building on fire, and China is purchasing the board, the table, and the land where the game is played.

Some readers may find the suggested courses of action presented in the book based on an overly pessimistic view of the US and its allies’ creativity and diplomatic capacity. Only the first suggestion, “doubling down,” assumes that international system, as currently constructed on predominantly democratic ideals, is not doomed to failure. In the “double down” approach, the US led system will attempt to be maintained by military force. While this predominately military approach has been a trademark of the last 20 years, Kilcullen’s own keen examination shows that this method is failing and requires adaptation. But from this, it would seem logical to ask: is it not also possible for the U.S. and allied democracies to adapt to meet the challenges of liminal warfare and conceptual envelopment? Scope may have prevented the book from pursuing further examination of this counter adaptation, but without it the book ends rather pessimistically.

Kilcullen’s ability to frame complex problems in a methodic and pragmatic way is the real genius in this work. His constructs of liminal warfare, fitness landscape, and conceptual envelopment are useful to frame the complexities of the current state of international affairs. This reader highly recommends this book for anyone interested in the changing character of war and international affairs and suggests that it belongs on the bookshelf of both military and civil service professionals.

Major Nicholas Underwood, is a U.S. Air Force Special Operations Command pilot and is currently a student at the Naval Postgraduate School pursuing a degree in Defense Analysis.